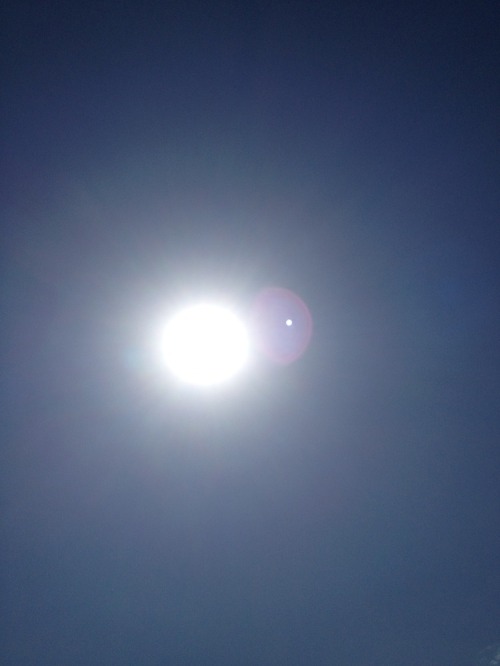 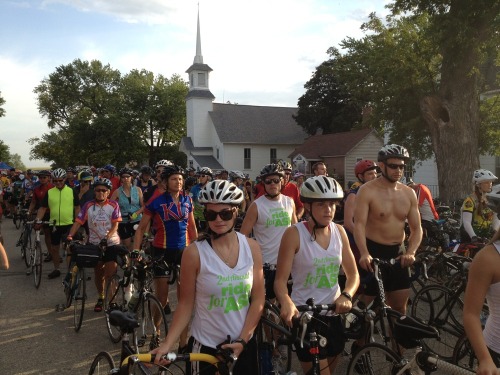 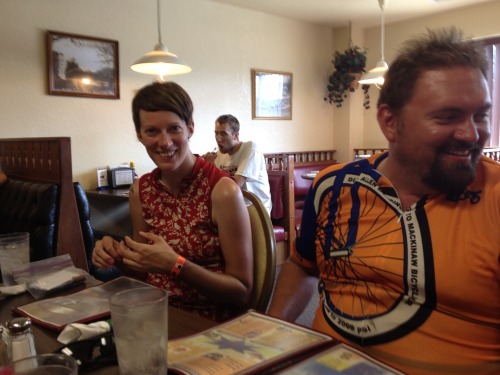 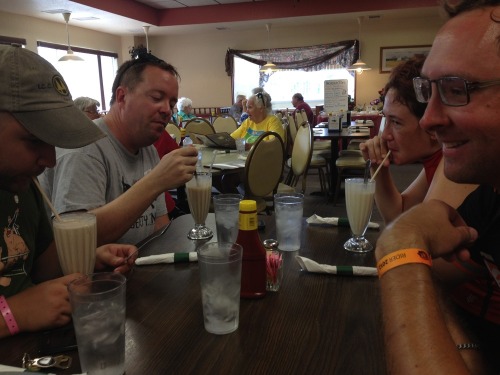 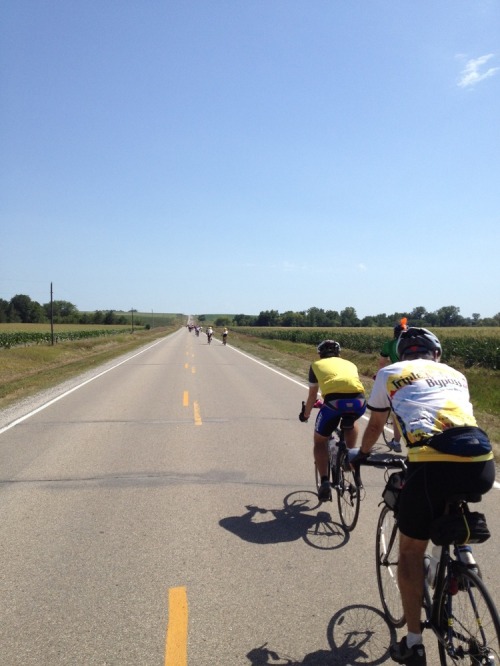 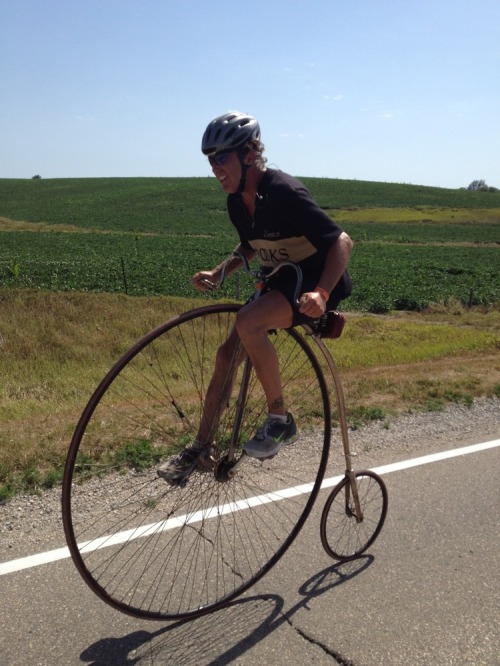 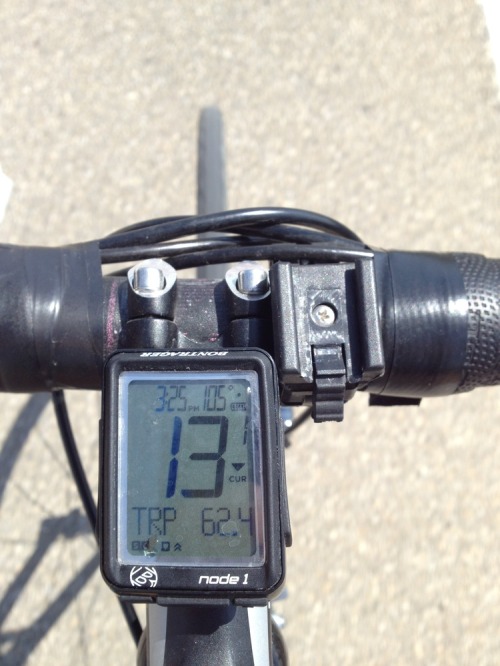 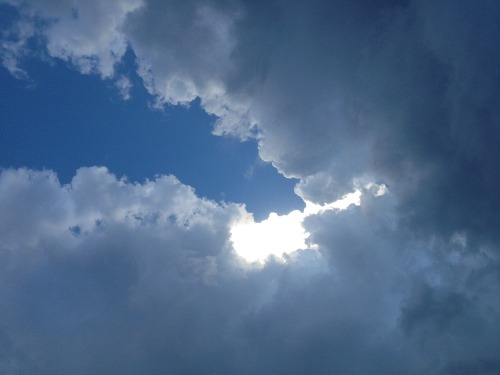 The fourth day on the road would be the hottest and windiest day of the ride, our fourth day with temps near or above 100 degrees. We were expecting a front to come through overnight after the ride and someone on the route said, “If it rains, you know what I’m going to do? I’m going to lay down in it and THANK GOD!” No one in my group would have felt much different. We were tired, and RAGBRAI isn’t as much fun when you’re just trying to get through the day’s ride. When it is just too hot to stop and enjoy the pass-through towns. When you need water more than you want a beer.
END_OF_DOCUMENT_TOKEN_TO_BE_REPLACED 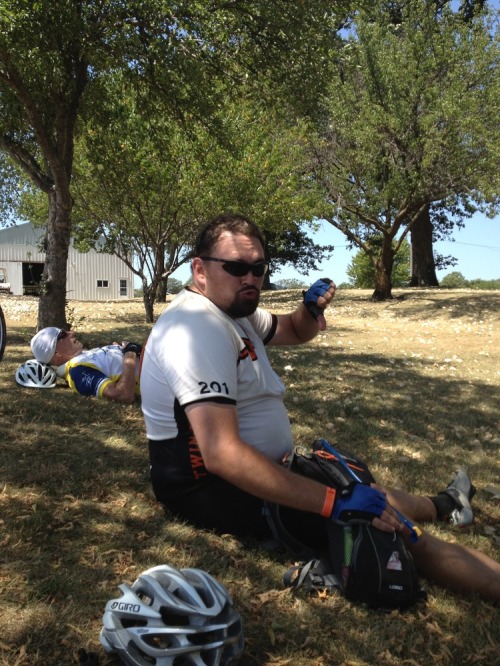 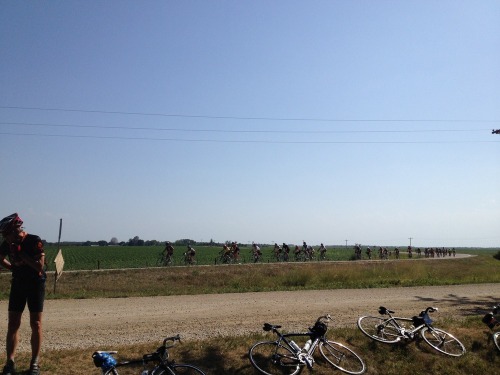 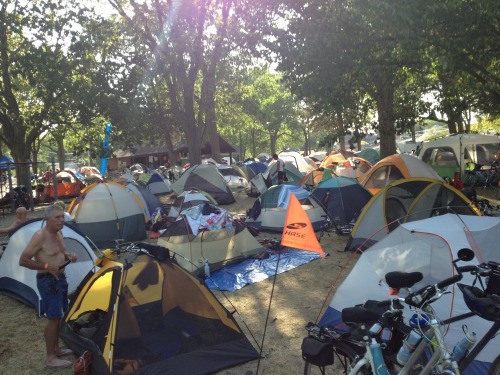 [UPDATE FROM YESTERDAY’S POST] So it turns out I did take one picture from the second day. I had run low on cash and needed to get to an ATM, and the only one they had running in town was inside a bar. I went in to get cash and the bar was *packed* with people ordering beers, Bloody Marys, and Vodka-lemonades. It was 9 AM. A few days later I was talking with a guy who’d ridden in 25 consecutive RAGBRAI’s. He said there were two broad types of riders – water bottle riders and beer bottle riders. It was clear where most of the people in this bar fit.

The third day was going to be a long, hot, windy day. The official distance was just over 81 miles and there was an optional 23-mile loop to make the day 104 for those so inclined. We agreed that it would be best to get an early start, so we elected to wake up at 5 and try to be on the road by 6:00. Unfortunately, most of the other teams we were camping with had elected to be on the road by 5:30, so the early wake up was preceded by the sounds of 20 other riders taking down tents and getting themselves moving. As the sun was coming up we got ourselves out of bed, dressed to ride, and packed up. I was tired from not getting enough sleep, but felt pretty good and mostly recovered from yesterday’s effort. Eric and I agreed that today we would take it easy and try to get the Karras loop done with the fewest number of heartbeats.
END_OF_DOCUMENT_TOKEN_TO_BE_REPLACED 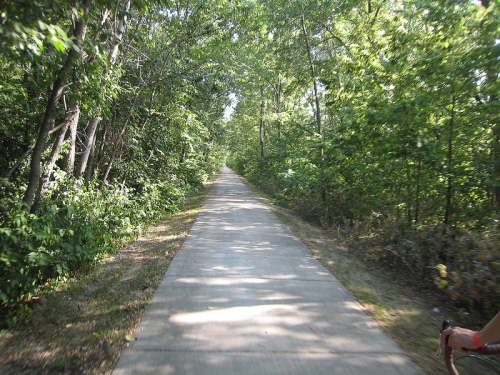 We planned to start Day 2, a manageable distance of 62 miles, a 100k metric century, around 7:30 again. After a hot night with a surprise rain shower we were treated by our host to a fantastic breakfast in the morning. She even had Tang. Tang! Narissa wasn’t ready to get up with us, so we didn’t get a chance to say goodbye to our new friend. We took our time getting ready and it was closer to 8 before we were finally ready to leave Cherokee for Lake City.

The route out of Cherokee took us up the same steep hill I’d been happy to avoid the day before. George had made a pre-dawn ride out of town and said that the hill went up for a long time, steep at first and then flattening out to a more manageable grade for a while. With a good breakfast in me I was rearing to go, so I attacked the hill pretty hard. Eric and I both were ready to hit the ground running and as we climbed up away from Cherokee we fairly quickly left the rest of our team behind. Together, Eric and I put the pedal to the metal and made pretty short work of the route.

END_OF_DOCUMENT_TOKEN_TO_BE_REPLACED 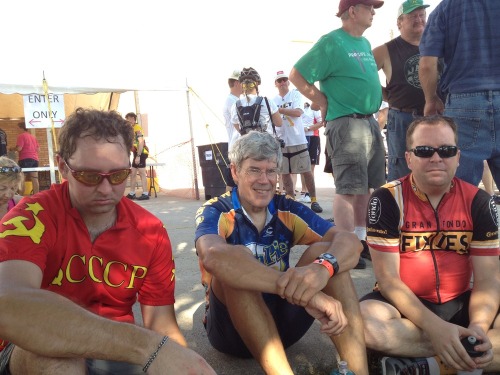 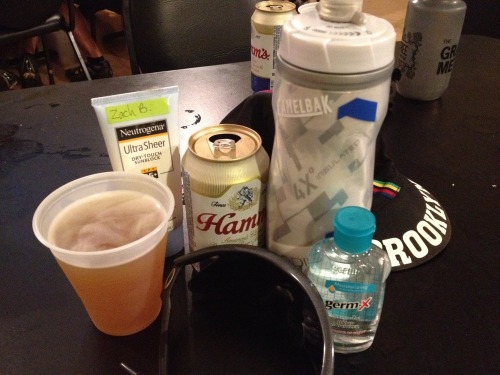 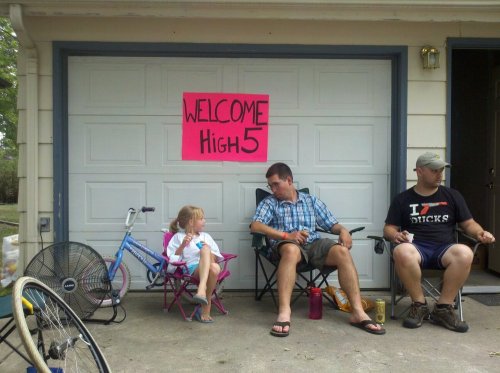 Getting dressed inside a one-person tent is a bit of a trick, but I manage with my dignity largely undamaged and having only put my shorts on backwards once. Getting your gear packed up is an “every person for themselves” activity with this group, and it will be a few days before I have my stuff sorted out properly to have essentials and nonessentials in the right place and separated. Eventually we’ve all got ourselves ready to ride and the van packed up with our bags and tents, chairs, and coolers. We get some pictures of the team on our first day, a portrait and an action “high-5” shot. Pat takes a Sharpie to my legs and writes “Virgin” on my calves so everyone will know it is my first RAGBRAI. It’s a ride tradition, although later in the day I saw a young girl riding her first with “Maiden” on her calves. Classy. By 7:45 or so we’re ready to roll out.
END_OF_DOCUMENT_TOKEN_TO_BE_REPLACED 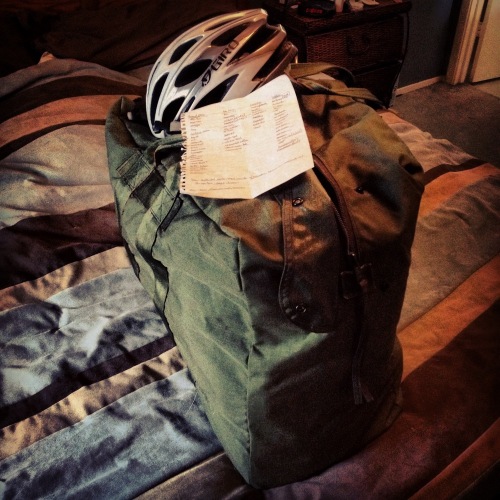 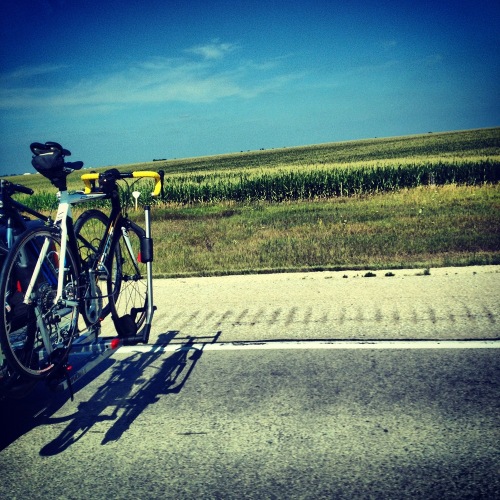 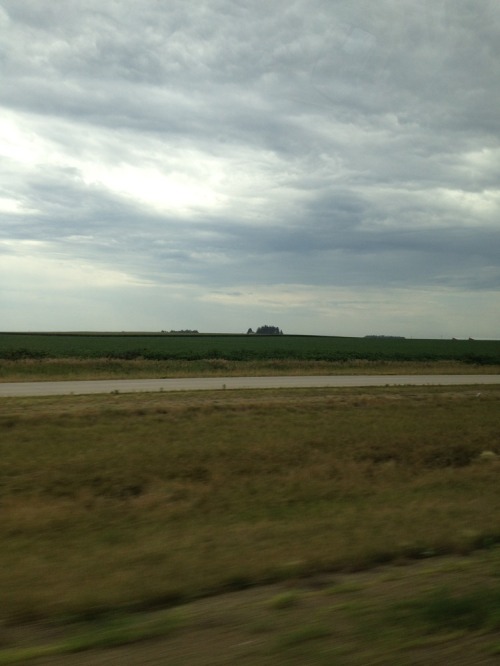 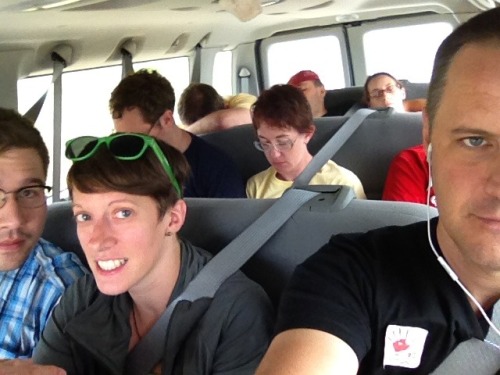 A few months ago I was asked if I wanted to ride in this year’s edition of the Register’s Annual Great Bike Ride Across Iowa (RAGBRAI) by Pat Clements, the brother of my best friend from high school. He knew I rode bikes, thanks to the miracle of Facebook, and thought they’d have an extra seat in the support van for me if I was interested in joining the team he was putting together. My sister had ridden RAGBRAI a few years ago and loved it, Lance Armstrong rode part of it the year after he retired (the first time), and lots of other people I knew had ridden it or talked about it. At 40 years old, RAGBRAI is a cycling institution and an event that is on lots of people’s biking bucket lists. I thought it over for about 2 seconds before saying yes. I was going to be a member of “Team High 5!” for the XL edition of RAGBRAI.
END_OF_DOCUMENT_TOKEN_TO_BE_REPLACED 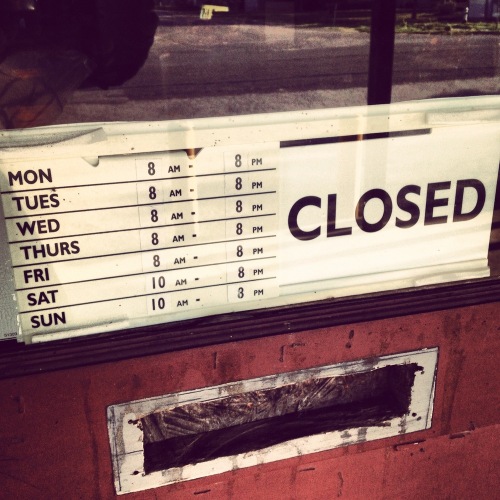 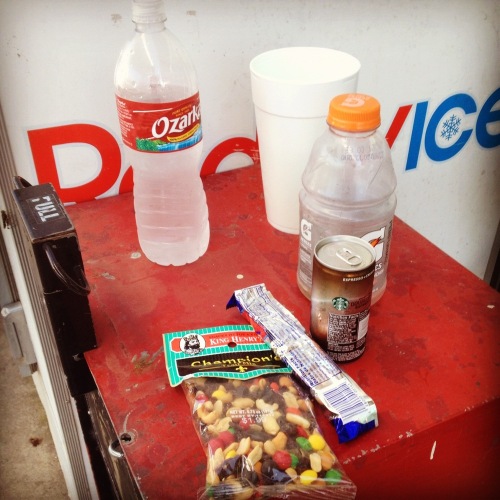 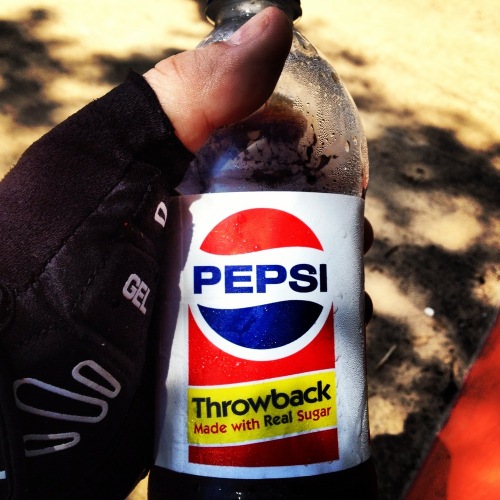 “And when I got to another ocean, I figured since I’d gone this far, I might as well just turn back and keep right on going. When I got tired, I slept. When I got hungry, I ate. When I had to go…you know… I went.” – Forrest Gump

I had planned to do a long ride this morning, 75 miles out to Andice and back, just to see how I was feeling before heading up to Iowa on Thursday. Next week I’ll be riding 500-ish miles in the 40th annual RAGBRAI (Register’s Annual Great Bike Ride Across Iowa) ride. That ride is a week long, with daily distances ranging from 40 miles to 80 miles, going across Iowa from the Missouri river in the west to the Mississippi river in the east. I’m riding with a group of riders who’ve been doing this ride together for several years. They’re all super-excited about it and I’m looking forward to seeing what it is all about. We’ll be riding all day, partying all evening, then camping at night for the whole week.

The distances we’ll be covering are ones that I’m comfortable riding, and since we can take as long as we want, and stop whenever we need to, the riding part won’t be too much of an endurance challenge. That will come from the “partying” and “camping” parts of the trip. I did the best I could to simulate the RAGBRAI experience by staying up really late last night and then waking up at 5 to be out the door as soon as it was light enough to see the road. If I had planned better I would also have been hungover, but as it turns out that level of simulation would have been extremely problematic as the day progressed.

END_OF_DOCUMENT_TOKEN_TO_BE_REPLACED

The kids had a great day out after the last day of school, then stayed up way past their bedtime reading on the couch. We let them stay there an this is how I found them in the morning. 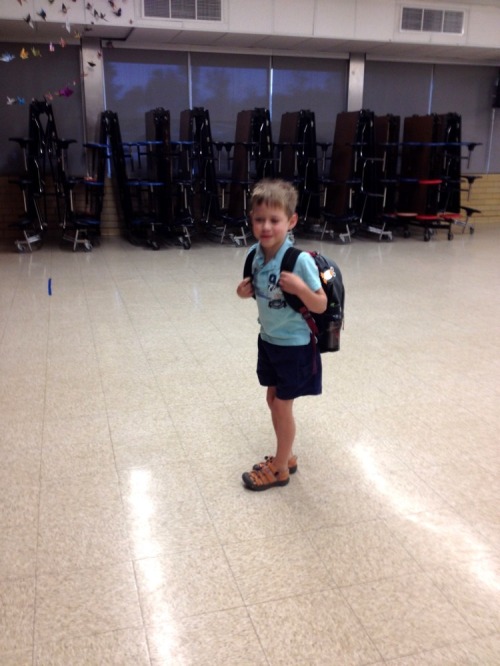 The end of the first year of school.

At least one of us is excited.