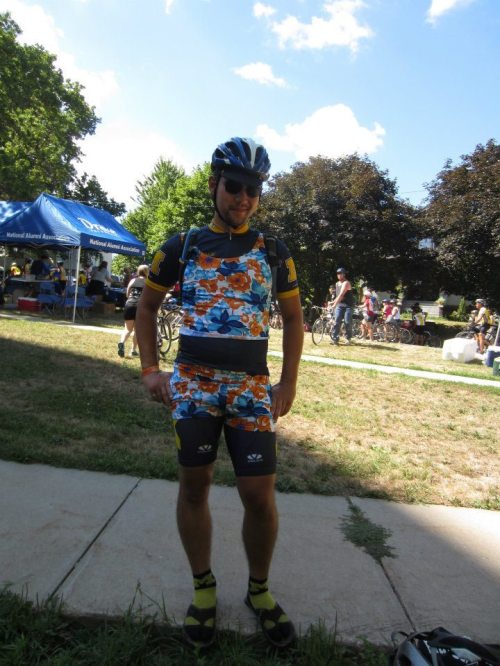 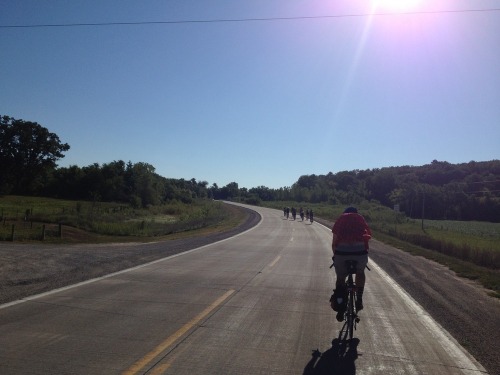 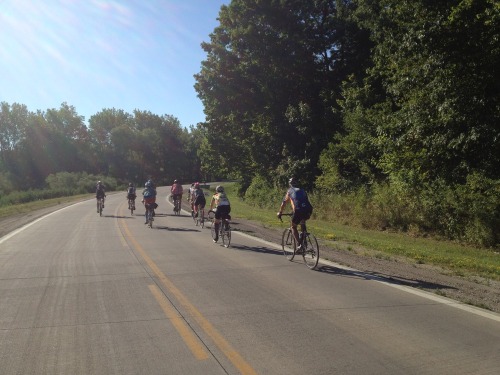 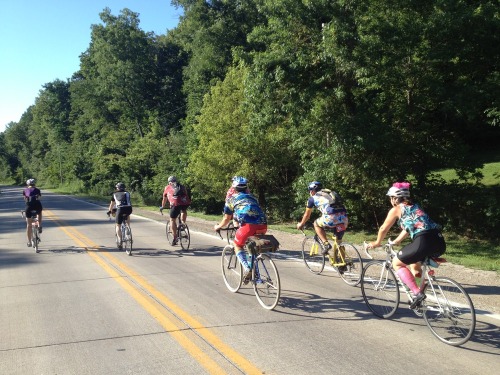 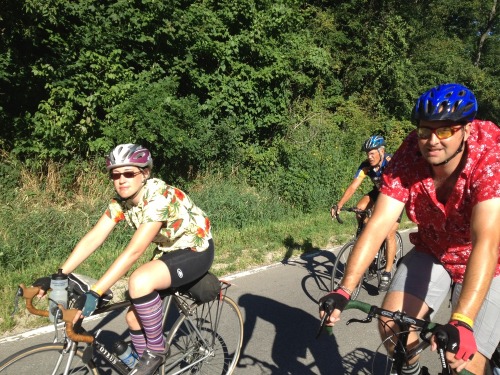 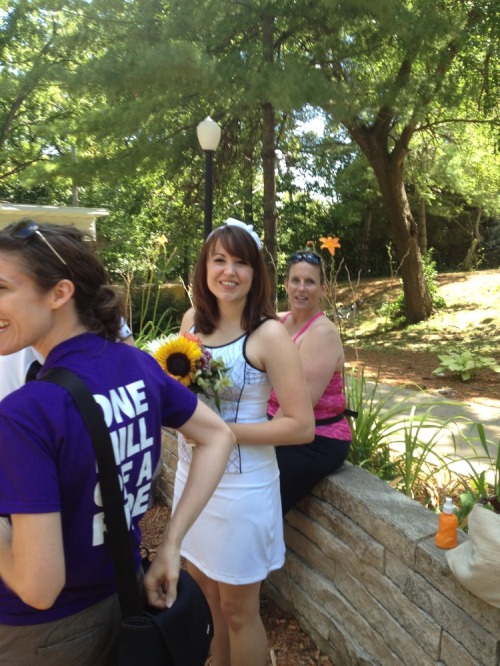 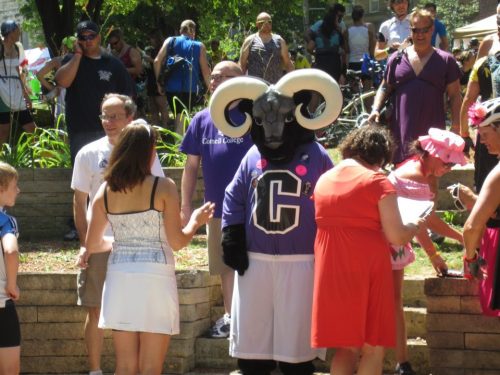 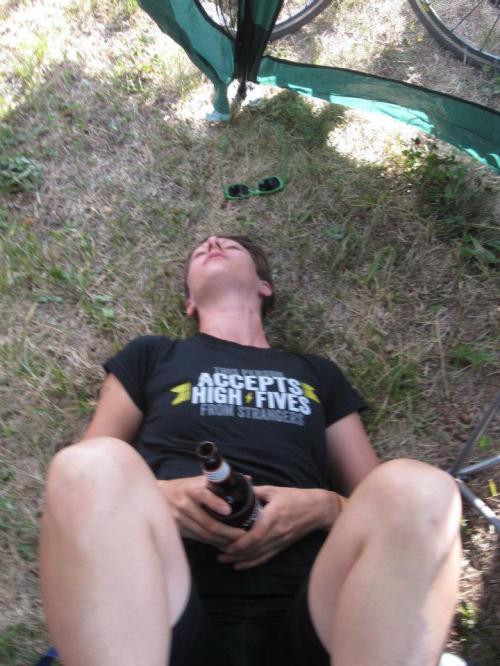 The second to last day was the shortest all week and we were looking forward to having much nicer weather. We’d decided beforehand that today would be “Hawaiian shirt day” so we traded our cycling jerseys for flowered shirts. Eric won the early judging by forgoing the Hawaiian shirt and opting instead for a flowered tankini that he wore over his University of Michigan team kit. Since we were staying with a construction company their day started pretty early, so despite the late night ours did too. Our hosts brought us a very nice breakfast of eggs, bacon and sausage, and other treats, which we all appreciated and enjoyed. We took our time getting ready to roll out and left close to 8, I think. We also picked up another rider, a fellow also named David, who was friends with some of our Michigan contingent.

Everyone wanted to ride along the river, the same route my wrong turn the previous afternoon had followed, so we took the long way out of town. It ended up being a little bit longer than planned because it took a while to figure out how to get on the right road from the campground without thousands of other people to follow. In the end we found the right route and enjoyed having the road to ourselves for a while. We eventually caught up with the rest of the ride on the official route out of town and then came to our first stop in the Czech Village section of Cedar Rapids. We slowly made our way through the first stop, spending some time chatting with a dad who was riding with his 19-month old son. The toddler was doing his best to help his dad get properly coated with sunscreen, working with the kind of diligence and enthusiasm only a kid that age can muster. Dad said that riding with his son in a trailer was easier than expected, as long as they stopped every couple of miles to play and didn’t try to make the full mileage each day. One of the things that surprised me was how family-friendly RAGBARI can be, and it gave me ideas for the years ahead to try it with mine.

The RAGBRAI route report nicely sums up the sights along the way. While we enjoyed the cooler temps, the winds were pretty strong and for most of the day we’d be riding right into them. There was also some pretty steep rollers on the route and it made it hard for all of us to stay together. We elected to gather at each town, with whomever was in the lead pulling over to wait when getting to each town. And the first one after getting clear of Cedar Rapids was Mount Vernon, home of Cornell College (not to be confused with Cornell University in New York). Mount Vernon was packed, but despite the crowd it was obvious that this was a lovely little college town worthy of the name Cornell. We split up to find food and some beer-based hangover remedy, then gathered back together under the gazebo pictured in the RAGBRAI Route Report above. While were chatting, Dan started to catalog his complaints about the Hawaiian shirt he was wearing, a modest red-and-white flowered number he’d scored at Goodwill.

“I don’t know who this thing was built for,” he said. “It is way too big across the chest, but even though it says it is a large, it is way too short in the back.”

Indeed, the hem of his shirt exposed the small of his back when he was bent over the handlebars and he was having to be sure to apply sunscreen to his “tramp stamp” area.

“And, for some reason, the buttons are all on the wrong side…”

“But…it was in the Men’s section at the Goodwill!”

Several minutes of laughter as we more closely examined the shirt and noticed all the little details that had escaped our attention before. The darts on the front, creating room for an ample bosum. The decorative holes stiched into the front and back. Suddenly we had a new contender in the team’s “Best Hawaiian Shirt” competition, and it was on the back of the man we were now calling “Rosedan”.

We were enjoying our second breakfast, and Dan’s lady shirt, when a woman walking around the gazebo area announced that there was going to be a wedding held there shortly and we were all welcomed to be in it. Sure enough, a minute later we spied the bride and groom, dressed in slightly modified riding kits, their family, and band of fellow RAGBRAI riders who’d been recruited as an impromptu wedding party headed toward the gazebo. Most of the wedding party consisted of men wearing dresses (it was the shortest riding day after all, costumery was part of the deal), which was a nice touch. The couple had a brief, touching little ceremony and a huge cheer went up when the couple was introduced to the crowd. It was awesome. Afterwards the newlyweds posed for pictures with the mascot for Cornell college, a muscular ram in a basketball uniform.

We eventually hit the road again, and while the temps were in the 80’s the wind was kind of brisk and almost always out of the wrong direction. The hills weren’t very tall, but there were plenty of them and they were pretty steep. With the wind in your face you had to pedal downhill, pedal hard across the valley to keep your momentum up, then hope for the best on the next uphill. Still a little slow from the night before, and with a scratchy throat starting from the cigar and a night in the chill, I didn’t enjoy the riding much. But it was nice to be out on the road with our full team and we stopped at a city down the route for a nice lunch together in a park by a stream. Before we got to the overnight town of Anamosa we had one more stop we were going to make.